Pillar with a sculpture of the Holy Trinity

A sandstone pillar with a sculpture of the Holy Trinity from 1752, not identified by the author, situated in the centre of the village. A unique Baroque sculptural monument in the region in terms of iconography and typology.

Sandstone 'column' of the Holy Trinity on a stepped triangular pedestal with truncated corners, richly decorated with relief decoration, on which is erected a triangular pillar bearing a sculpture of the Holy Trinity and the Virgin Immaculata. The pedestal rests on a stepped platform. On the sides of the first step of the pedestal are three reliefs depicting St John of Nepomuk blessing the kneeling Queen Sophia, St John Sarkander and a figural relief of God the Father with the kneeling figure of St Francis of Paola. The individual scenes are placed in a kind of theatre stage, the upper part lined with cabaskets. The central part of the pedestal is flanked by groups of angels in clouds on two sides, and the third, frontal side has a relief with the figure of the archangel Michael holding a sword in his right hand and scales in his left, with angel heads on either side. The third part of the pedestal is decorated with two separate reliefs on the sides: the figure of St. Francis of Paola in clouds, in religious habit, with a book in his left hand and a lily in his right hand, under his feet a cartouche with a carved two-line inscription: S. ANTONI / de PADUA. On the sides of the saint's head are angel heads, with shells between them. The second relief depicts the figure of St. Joseph with a lily in his left hand, his right hand leaning on a book on an Ionic column, with an angel's head on the right side of his head and again a shell above his head. 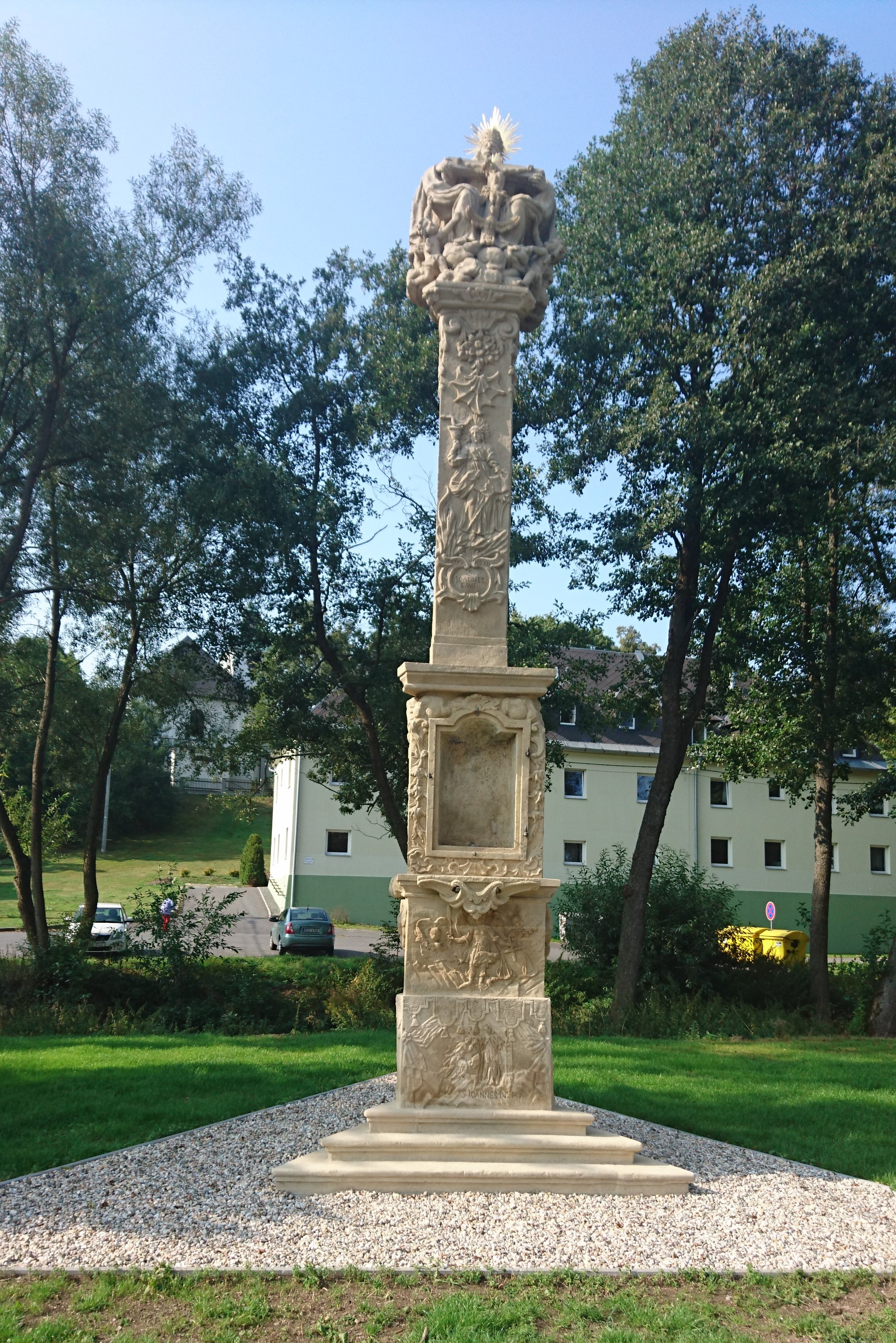 Under the feet is a cartouche with the inscription S. IOSEPH . The front side is conceived as a niche, originally covered with a grille (currently missing). The triangular pillar has a relief figure of St. John the Evangelist on the front side. Under his feet is a cartouche with the inscription. FVNDATE E / LIGNO STATVIT / VOTOQVE WIL / HELMVS / FVNDANS PRO / CESSVM VIVA PRO / VOCETRIVNI / FVnDatr LT , the other inscription. / den 8 octobris / Ao 1752 . On the top of the pillar is a sculpture of the Holy Trinity (type Throne of Divine Grace ) and on the other side is Our Lady Immaculata on a cloudy base, around an angelic head.

Statue of St. John of Nepomuk

Baroque sandstone statue of St. John of Nepomuk on a richly decorated prismatic pedestal, dated 1751, located by the main road in the southern part of the village.

Sandstone statue of St. John of Nepomuk on a prismatic pedestal. The base of the pedestal is decorated with acanthus leaves. On the front side of the pedestal an empty cartouche with a shell frame, below it a pair of crossed branches. On the sides of the pedestal relief figures of Franciscan saints (St. Francis of Assisi and probably St. Anthony of Padua?). St Francis depicted in religious habit with crucifix in right hand and palm branch in left hand, angel's head on left side of head, St Anthony(?) depicted again in religious habit, standing with arms outstretched, book on right side, holding branch in left hand, angel's heads around head. The back surface of the pedestal bears a four-line inscription with a chronogram (a torso of the original inscription), placed at the top of a field defined by a chiselled line, with an acanthus flourish below the inscription. On the inlaid cornice with acanthus splays is a concretely curved plinth with stylised shells and torsos of angel heads. The date 1751 is carved on the back of the plinth. The saint is depicted in the contrapposto of his right leg, in a slight acesian bend, wearing a traditional headdress with biretta. In his right hand he holds a raised crucifix, with his left hand he holds a palm branch against his chest. 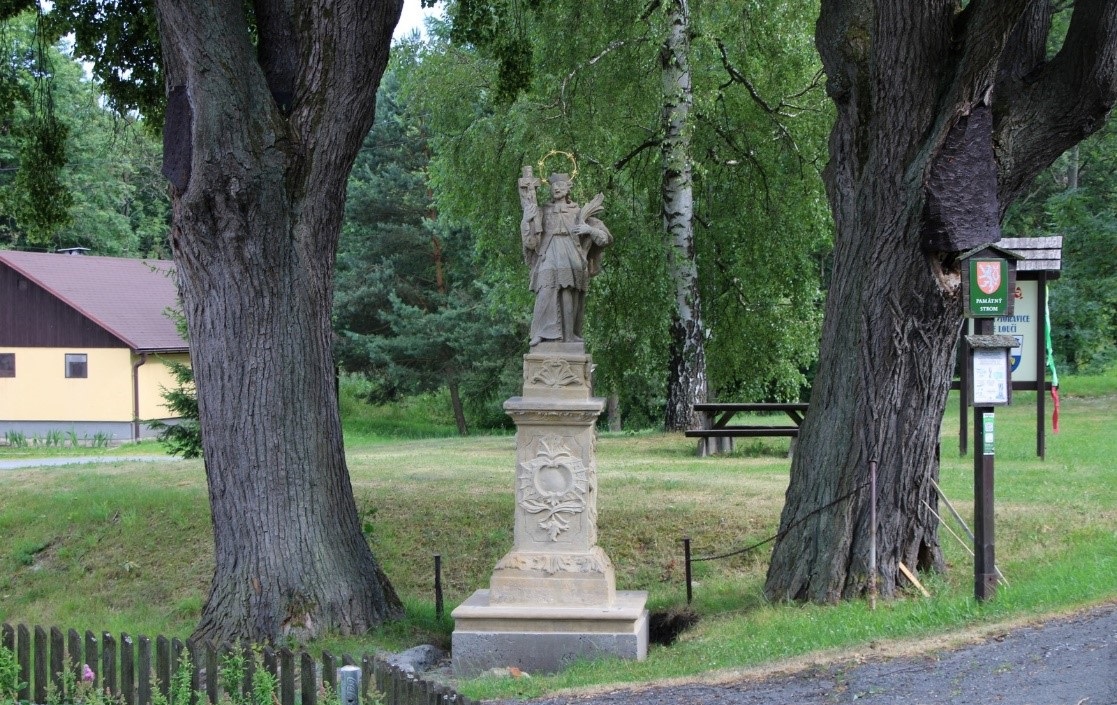 Column with the statue of Our Lady of the Immaculata 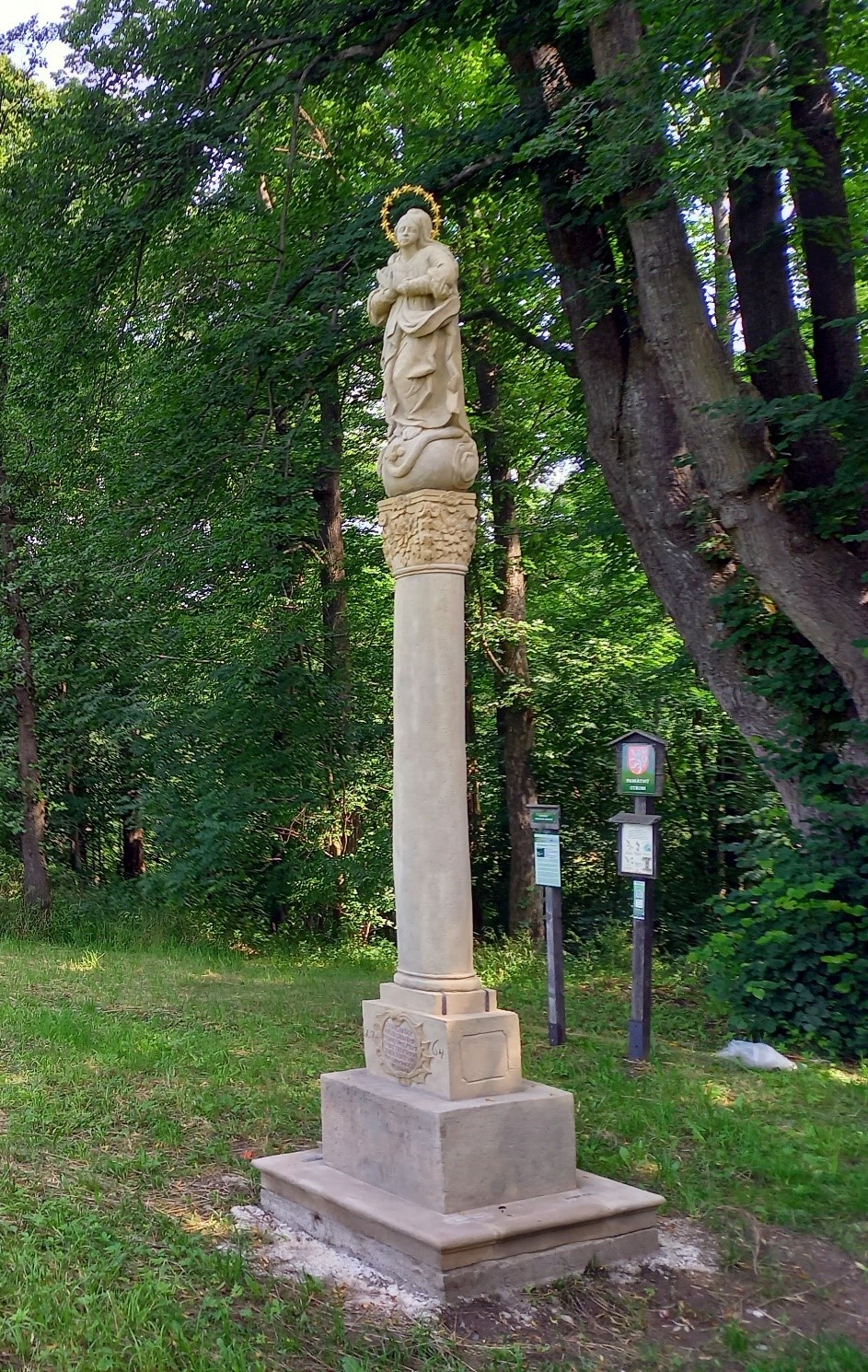 Baroque, author's undetermined sandstone statue of Our Lady of Immaculata, mounted on a high column with a stepped prismatic base with a cartouche with an inscription, dated 1764. Situated by the main road on the southern edge of the village.

Tall sandstone column on a tiered prismatic plinth on a stepped platform. On the upper part of the pedestal in a cartouche in a stylized shell frame is a seven-line inscription: ZV EHREN DER / VN PEFLEGDEN EMP / FENGNVS VNT MVT / TER GOTTES MARIA / IST DIESE STATVA AVFF GERICHDET / WORDEN //. Dates 17 and 64 carved on the sides of the cartouche. The sides of the upper part of the base are decorated with a carved line around the perimeter with segmentally pierced corners. The column is mounted on a square plinth with a Corinthian head decorated with floral decoration. On it rests the figure of Our Lady of the Immaculata on a globe encircled by a serpent. Our Lady is depicted in a contrapposto and slight acesian curve, wearing a traditional robe, the folds of the drapery are sharply cut, cascading at the edges of the robe. Hands clasped at breast, head slightly bowed.

The Baroque bridge can be found in the northern part of the village to the left of the road leading from Karlova Studánka to Břidličná. It dates back to the mid-18th century.

It is a double-arched bridge made of rough quarry stone. It is referred to as a Swedish-type bridge. This construction is quite unique in our country. The uniqueness of the bridge lies in the significant bowing of the bridge deck compared to more common bridges. These have a bridge deck that is only slightly or almost visually horizontal. In the case of the bridge in Dolní Moravice, the bowing is quite visible. Originally, the bridge was without railings, but today there is a modern chain railing on the bridge. 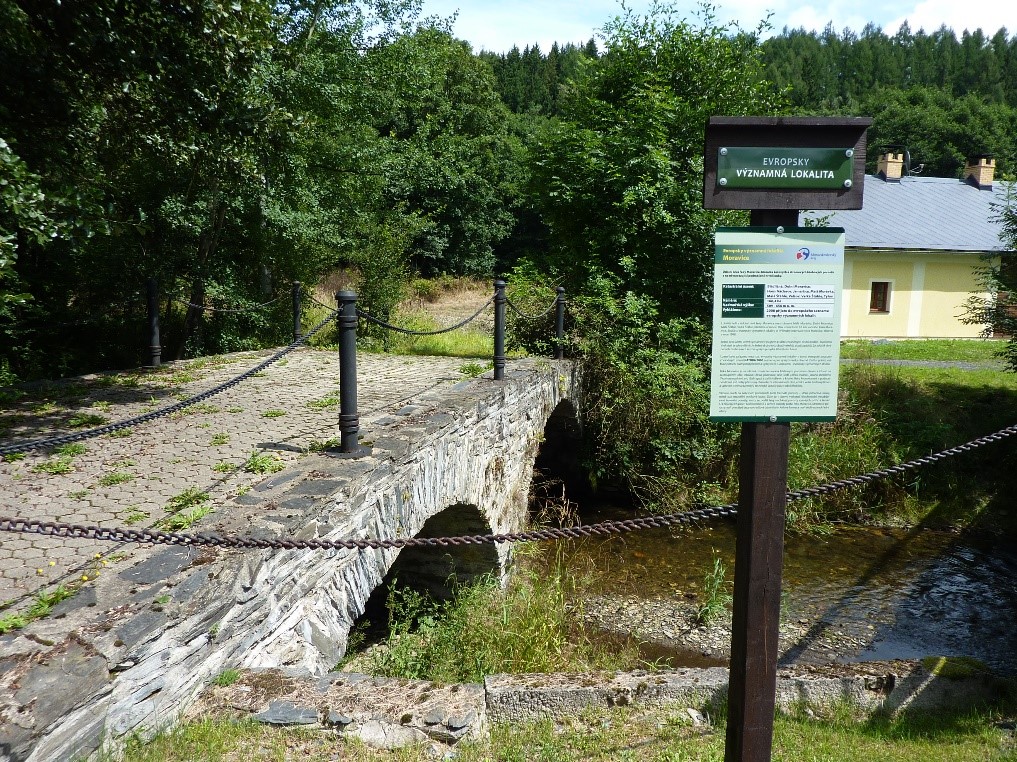 Monument to the fallen in World War I

A monument dedicated to "our comrades who fell for the people in the Great War of 1914-1918" was unveiled on 13 February 1922 and consecrated by the local parish priest. As a reminder of the dead and lost, this monument was erected at the crossroads in the middle of the village. It was made in the stone workshop of Master Valter from Supíkovice in Silesia and transported to Lower Moravice on a wagon. The inhabitants of Horní Moravice also participated in the construction of the monument.

The work can be found at the intersection of the 445 road with the local road from Dolní Moravice to the upper part in Nová Ves.

The monument consisted of a rectangular stone base, surmounted by a square pillar with a cornice and a receding finial bearing a gilded eagle. The black stone plaque contained the names of just under 40 fallen citizens of both communities. They are divided in columns indicating the jurisdiction, Nieder Mohrau (Lower) and Ober Mohrau (Upper).

Because the developments after World War II did not favour too much commemoration of the displaced Germans. The memorial was turned into a celebration of the Soviet liberators. This was expressed by the inscription OUR LIBERATORS and the obligatory five-pointed star.

After November 1989, the star and the two decorative stone balls disappeared.

As part of the beautification of the village, the damaged monument was fortunately restored in a dignified manner. The repaired monument was unveiled on 16 September 2016. The work basically replicates the pre-war condition, the missing spheres were restored, the eagle on the top was added, and the plaque decorated with a sword and a wreath with the names of the fallen returned. Apart from the municipality, the Ministry of Defence of the Czech Republic and the association of natives of Dolní and Horní Moravice from Germany contributed financially to the restoration of the monument. 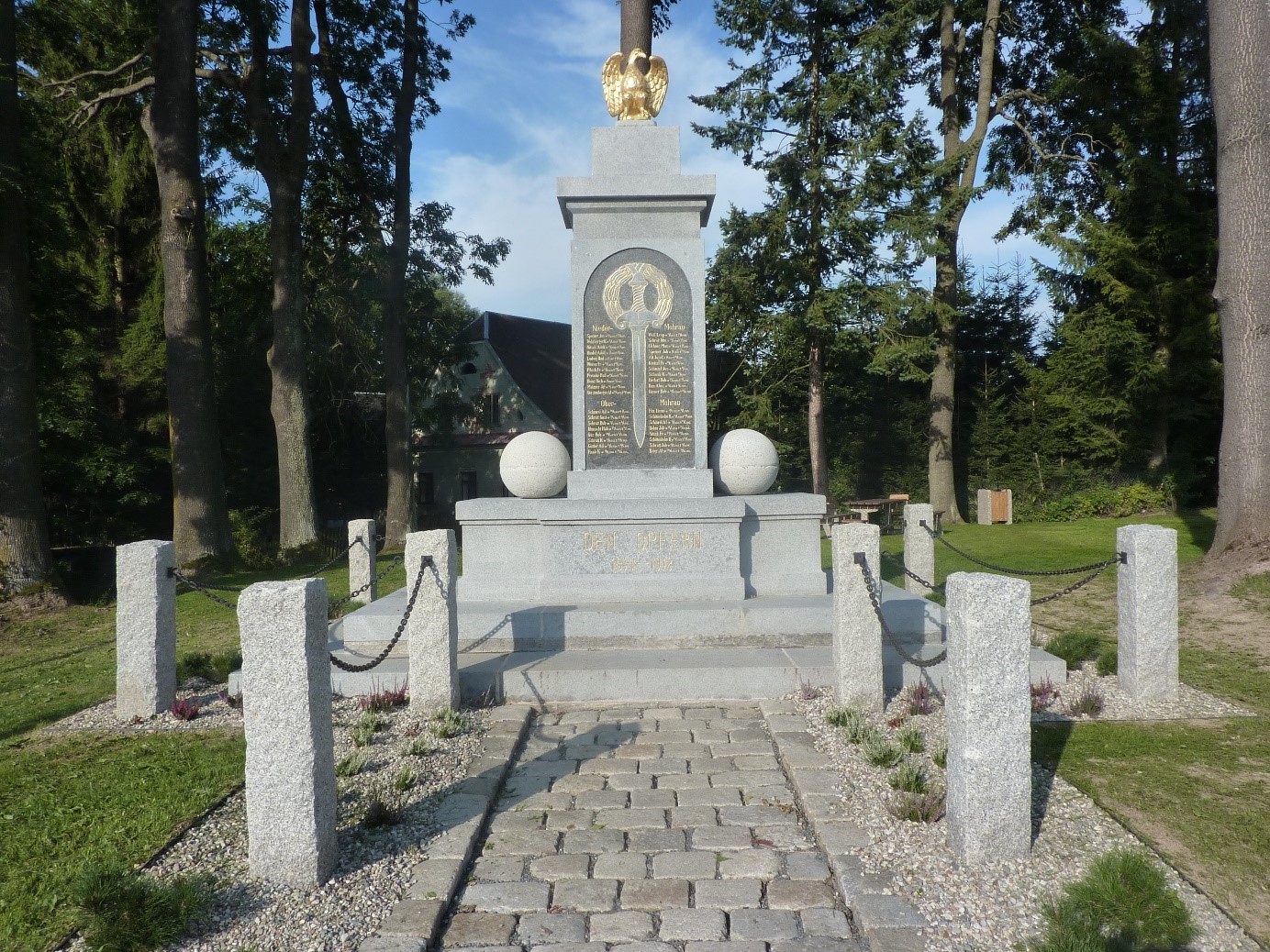 Mid C19 brick vernacular architecture with gable end facing the road, with classical elements in the gable front. Rectangular building with an outbuilding, evidence of the original development of the village. The house is located in Dolní Moravice No. 17.